26-year-old violinist William Hagen has performed as soloist, recitalist, and chamber musician across the United States, Europe, and Asia. This season, William performs with orchestras all over the United States, including his debut with the Detroit Symphony Orchestra, and appears at the Louvre in Paris and other venues around Europe.

Summer of 2018 featured debuts with the San Francisco Symphony and Alexander Prior, the Indianapolis Symphony Orchestra and Brett Mitchell, and an appearance at the Grant Park Music Festival in Chicago with Carlos Kalmar and the Grant Park Orchestra.

His 2017-18 season featured debuts with the Frankfurt Radio Orchestra (HR Sinfonieorchester) conducted by Christoph Eschenbach and the Seattle Symphony directed by Pablo Rus Broseta, and return engagements with the Utah Symphony under the direction of Matthias Pintscher and the Fort Worth Symphony Orchestra led by Andrew Gourlay. He performed recitals with pianist Albert Cano Smit in Chicago, Aspen, Darmstadt, and at the University of Florida.

In the 2016-17 season, William performed with conductor Nicolas McGegan both at the Aspen Music Festival and with the Pasadena Symphony, made his debut with the Oregon Symphony under Carlos Kalmar, performed with the Brussels Chamber Orchestra in Beijing, and played recitals in Paris, Brussels, Virginia and at the Ravinia Festival. He played chamber music concerts with Steven Isserlis at Wigmore Hall in London, with Tabea Zimmermann at the Beethovenhaus in Bonn, and in New York City with the Jupiter Chamber Players.

William’s 2015-16 season included his Tokyo recital debut, his debut at the Colmar Festival in France, and recitals in Los Angeles, Brussels, and several cities in Florida. He returned to the Utah Symphony at Deer Valley Music Festival and to the Aspen Music Festival, both as chamber musician and as soloist with conductor Ludovic Morlot, and appeared with the Sofia Philharmonic in Bulgaria and the Shreveport Symphony, among others. He also played chamber music with Gidon Kremer, Steven Isserlis, and Christian Tetzlaff at the “Chamber Music Connects the World” festival in Kronberg, Germany.

Since his debut with the Utah Symphony at age nine, William has performed with conductors such as Marin Alsop, Christian Arming, Placido Domingo, Miguel Harth-Bedoya, Michel Tabachnik and Hugh Wolff, and with the symphony orchestras of Albany, Buffalo, Fort Worth, Jacksonville, St. Louis, Oregon, Utah, and others. Abroad, he has performed with the Brussels Philharmonic, the National Orchestra of Belgium, the ORF Radio-Sinfonieorchester in Vienna, the Orchestre Philharmonique Royal de Liège, and in Japan with the Yokohama Sinfonietta and the Sendai Philharmonic.

A native of Salt Lake City, Utah, William first heard the violin when he was 3 and began taking lessons at age 4 with Natalie Reed, followed by Deborah Moench. At age 10, he began studying with Robert Lipsett at the Colburn School in Los Angeles, where he studied until the age of 17. After studying at the Juilliard School for two years with Itzhak Perlman, William returned to Los Angeles to continue studying with Robert Lipsett at the Colburn Conservatory. He is currently enrolled at the Kronberg Academy in Germany, where he is a student of Christian Tetzlaff. William is an alumnus of the Verbier Academy in Switzerland, the Perlman Music Program, and the Aspen Music Festival, where he spent many summers. 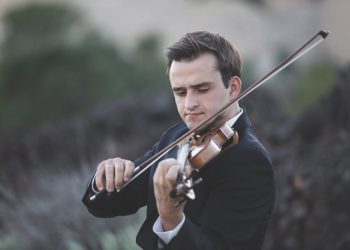